Are quantum majors Google, IBM, Intel and Alibaba backing the right technologies for the long term?

Quantum majors Google, IBM, Intel and Alibaba, together with startup Rigetti have so far focussed on building quantum devices based on superconducting qubits. Many expect that quantum supremacy will soon be demonstrated based on such a device. But how will these early prototypes scale-up in the long term race to build a large scale machine capable of useful universal fault tolerant quantum computation (FTQC)? Many alternative technologies continue to be championed by academic teams and startups such as IonQ, SQC and PsiQuantum. This article focusses on the case for one specific contender – trapped ion qubits with global field microwave control.

Atoms such as Calcium (Ca), Beryllium (Be), Magnesium (Mg) or Ytterbium (Yb) are stripped of an electron to give them an electric charge and are then levitated in an electric field above a micro-fabricated grid of electrodes (an X-junction) allowing individual ions to be controlled with exquisite precision.

Different configurations of the ion’s remaining outermost electrons form the alternative 1 and 0 states of the qubit.

Laser controlled quantum gate operation has demonstrated the highest fidelity of any current qubit technology, but at the expense of requiring individually tuned lasers for each gate (a challenge as devices scale up in size).

Near field microwave control is an alternative to using lasers, but still requires an individual local microwave antenna for each qubit (again a challenge as devices scale up).

Last year saw the publication of the NQIT Sussex blueprint for a microwave trapped ion quantum computer (23). Professor Winfried Hensinger makes no bones about the fact that he is now preparing a startup business to build a large scale device following this model. Reviewing quantum technology progress around the world he exudes genuine enthusiasm for the great work being undertaken by many groups.  But he has no doubt that it is his approach which will succeed in building really large scale quantum computers. 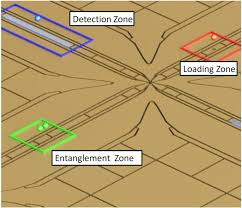 It is projected that a large scale machine of this type could factor a 2048-bit number, and so break current internet security protocols, in at worst 110 days or probably significantly less given suitable design and algorithm optimisations. More importantly it would be a universal quantum computer able to execute any quantum algorithm. Even a smaller version of such a machine could start to do a range of other very useful things.

Fact Based Insight uses a six step hardware roadmap to summarise progress towards a universal FTQC device. How does the NQIT Sussex blueprint stack up?

However global field microwave controlled ions do not automatically inherit this mantel. Microwave gate operation is slower and originally required the use of ions with states sensitive to magnetic-fields. This was detrimental to qubit stability. The Sussex team’s new approach makes use of ‘dressed states’. These are resilient to magnetic field noise demonstrating a thousand fold increase in qubit lifetime. Using this technique the team has already been able to achieve a two-qubit gate fidelity of 98.5%.

While this published result is still just short of the commonly targeted 99% fault tolerance threshold, further progress is expected and Hensinger is eager to point out that a new announcement on achieved fidelity above the threshold is imminent. However this needs to be demonstrated in a real prototype device to build confidence that the relatively large current required to generate the required magnetic fields can be accommodated.

The relatively recent start of work on global field microwave control (the first paper was only published in 2016)  perhaps explains why this technique is not yet well known. However its leverage of a well developed microwave technology such as that used in mobile phones should help reassure adopters. As we shall see, it potentially offers significant advantages as we start to scale up device size.

The demonstration of multi-qubit trapped ion devices is not as advanced as it is for superconducting qubit devices. However the basic X-junction design used by trapped ion devices, to confine, move and manipulate ions has been optimised over many years, and devices successfully operated with up to 14 ions. Going beyond this size with trapped ions has been difficult due to the need to set-up individually tuned lasers to drive each gate operation.

Global field microwave control promises to significantly simplify the creation of larger trapped ion quantum devices. Multiple qubits can be driven by a single global microwave field. The selective execution of quantum gates is controlled by the application of a simple voltage to the appropriate microchip channel (individual ions are moved within a local magnetic field to selectively turn on and off their interaction with the microwaves). This avoids the problem of having to increase the number of control lasers or how to embed individual micro-antennae for near field microwave control as one increases the number of qubits – all within a small space and without crosstalk between qubits or difficulties in impedance matching compromising quality.

One of the current superconducting qubit devices may be the first to demonstrate quantum supremacy,  but it is quite possible that a global field microwave device could play more than catch-up at this stage. Indeed, Hensinger’s group is seeking to use their technology to scale further and be the first to provide a ‘useful’ quantum advantage on real non-artificial problems.

The mainstream approach assumed by most quantum hardware groups seeking FTQC is to implement an error correcting protocol from the surface code family,  supplemented by the injection of magic states to allow a complete set of quantum gates to be achieved.

The NQIT Sussex Blueprint also follows this approach, and schematic details are proposed. However no quantum hardware group has yet translated the mathematical theory of error correction into practice.

A practical device must have a robust control architecture that supports programmable operation.

The NQIT Sussex Blueprint is based on a simple universal wafer layout, to which the required local DAC and electronic control can be layer bonded to form a self contained module. A unit size of 1296 X-junctions provides a natural focus around which a flexible microarchitecture can be designed. Specialists in the team are already working on such layouts. The design incorporates standard silicon microfabrication techniques. Most components required are off the shelf devices, however their integration will require careful engineering.

These on-module control electronics are a strength of the design concept. However in common with other approaches they face the need to calibrated and precisely drive a large number of local electric offsets that grows with the number of qubits. This points to the importance of a structured approach to their optimisation and control. This is an emerging part of the lower levels of the quantum software stack.

Work from QUTech is perhaps the best current illustration of how we can expect the definition of device processing architectures to develop. QUTech have developed a layered approach where the separation of micro instruction set, device-dependent and device-independent quantum assembly language (QASM) is being formalised. Companies such as Intel understand the role that microarchitecture design plays in building momentum across a family of commercial devices.

5. Scale up the device

This represents a potential major advantage of the NQIT Sussex blueprint.

A potential Achilles heal of superconducting qubit approaches is their reliance on sophisticated dilution refrigeration to achieve the mK operating temperatures they require. It’s a challenge to scale up individual fridges without losing cooling power and neither has anyone yet realised quantum interconnects in and out of such fridges.

The NQIT Sussex blueprint simply proposes to bolt together a number of UHV chambers to form a continuous housing for a large number of modular devices. In its full form this implies a machine the size of a football pitch (or at least a large building). But is that really an insurmountable requirement?  The LHC at CERN arguably demonstrates that the issues in engineering large scale vacuum systems can be addressed. The three LHC vacuum systems have a combined volume of 15,000m3, though only the beam pipe itself is operated in the true UHV regime.  This is a large scale undertaking, but isn’t the achievement of FTQC even more ground breaking than the LHC?

Groups pursuing distributed quantum computing architectures based on linking multiple devices usually assume photonic interconnects. Photonics has the advantage of new single photon sources and detectors, CMOS fabrication and compatibility with existing commercial optical communication technology. However photonic interconnects currently have a significant draw-back when used for the close-coupling of modules in a single large computer – the speed at which the links can operate is relatively slow, perhaps just 6 entanglement operations per second.

The NQIT Sussex Blueprint proposes a novel approach to providing the interconnects necessary to link the modules. If individual computer modules can be dynamically aligned to a tolerance of <10µm then ions can potentially be transferred directly between modules.  The proposal is to achieve the required alignment using controllable piezo actuators.  While this may sound challenging, the state-of-the-art nanotechnology and silicon micro-fabrication facilities already routinely work with such alignment technology in the 10nm regime.  It will be a significant step to demonstrate that these same techniques can be applied contiguously across an extended multi-wafer plane.

Whether or not photonic interconnects are used between local computing modules, they will almost certainly play a long term role for connections to a wider quantum internet. Trapped ion designs potentially have an advantage in this regard because of the experience many groups have built up in entangling ions and photons.

Like other current designs the NQIT Sussex Blueprint relies on the production of magic states to allow it to operate a full set of quantum gates.  For typical algorithms (e.g. factoring a 2048 bit integer) it is estimated that 90% of the machine’s qubits will be dedicated to this task. Intriguingly the potential flexibility of ion trap operations ( e.g. moving individual ions longer distances across the device) could open up possibilities for specialisation and optimisation of a magic stage factory.

Efficient preparation of input data in QRAM is also likely to be a key bottleneck for applications such as quantum search and quantum deep learning. In common with most other groups, consideration of how this can be optimised is a problem for the future.

The race to build the world’s first large scale quantum computer will be a long one, but investors, would-be startups and early adopters must act now. Fact Based Insight believes that the right strategy for governments and large commercial players is investment in a portfolio of technologies. Focussed startups will seek to place more direct bets.  Fact Based Insight believes that global field microwave trapped ion technology will continue to be part of this race.